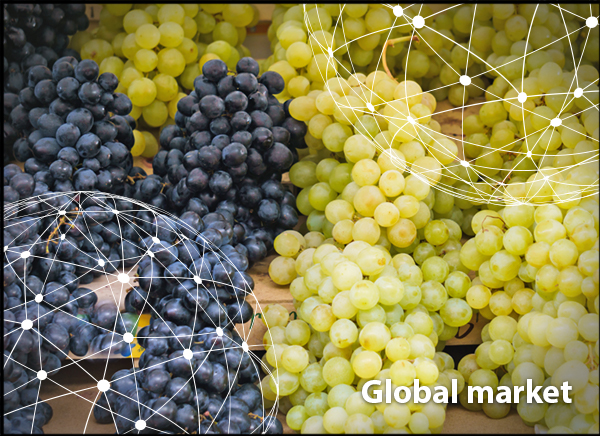 The production in the southern hemisphere is in full swing. Prices in the wholesale market are good, as there is a smaller volume to trade. The season is coming to an end in Namibia, and South Africa has a smaller volume than last year. In addition, more of their trade goes to other export markets and less to Europe. Peru and Chile are seeing their exports grow, but again many of their grapes go to the US and Asia. The harvest in China varies per region. In some places there is a bumper harvest, while other regions have had to deal with too low temperatures.

The Netherlands: No unrest on the grape market
The situation on the grape market is striking, to say the least. “The supply is a good deal lower than last year and the prices are at a particularly good level, as reported by a Dutch player in the grape market. The last Namibian grapes are currently being sold in Europe, so the focus is switching mainly to South Africa, which is supplying significantly less. The harvest forecasts had already been adjusted downwards because the setting did not go well after a spring with unstable weather conditions. Later, a heat wave in the Orange River and rain in the growing areas on the other side of the country also caused a lot of damage. The prices are 20 to 30% higher than last year, when they remained at a low level, and there are also considerably fewer grapes on the market across the board, since Peru has shipped significantly fewer grapes. The Indian harvest has also been delayed by the heavy rain. Furthermore, due to the great impact of diseases, various growers have also decided to sell their fruit locally. Slightly more grapes are expected in the coming weeks, but the supply will still be 10% lower than last year.

Germany: South Africa and Namibia dominate the supply
South Africa is currently on the market with a wide range of varieties, including the Arra, Sugraone, Prime Seedless, Dan Ben Hannah and Black Gem. Neighboring Namibia is also present, mainly with the Flame and Prime Seedless varieties. Brazil, just like Peru, is currently playing a minor role in the German wholesale market. The European supply from Italy, Spain and Turkey has almost disappeared from the shelves.

The supply and the demand are currently keeping pace, says a trader. The prices vary greatly and are highly dependent on the origin and the wholesale market. Lastly, a lot of poor quality goods have hit the shelves, and the market situation has been negatively affected by it. At the same time, parties with excellent quality fruit are being able to sell it for very high prices.

France: 20 to 30% lower prices
The Aledo grape season is coming to an end and the French market is switching to the grapes from Latin America. The Spanish season has been difficult due to the bad weather conditions. The humidity has been a especially big problem and grapes have been marketed for low prices. The Italian season went better, with good volumes and quality. In addition, the season lasted a month longer compared to last year. However, the consumption levels have been disappointing, hence the low prices on the market. On average, these have been 20 to 30% lower compared to last year.

Italy: Less consumption due to mild winter
The Sicilian grape season came to a close a few months ago. The season was tough, but there is still room for the sale of the last grapes, like the Crimson and Apulia varieties. “We stopped with the Crimson in early November,” says a Sicilian trader. “The last Apulia grapes were harvested at the end of November. Thanks to the fruit being kept in cold storage, the sale of the Crimson ended a few days ago, and that of the Apulia will continue until the beginning of February, although this only concerns some small quantities in mid-January. Throughout the season, the price at origin of the Crimson has oscillated between 1.00 and 1.20 Euro per kilo, despite the fact that they haven’t had the perfect coloration. The Apulia has been sold for the same price.”

In Apulia, the season finished after Christmas. “The last volumes were not appreciated on the market,” says a local grower. “They were sold for 0.70 Euro per kilo. The highest prices did not exceed 1 Euro per kilo. “On the one hand, mild and dry weather conditions caused the consumption to fall, and on the one hand, wet weather conditions caused rot in the grapes, which led to extra costs for the growers and the presence of pickers on the field until December.”

China: Cold weather hinders the harvest
The production of local grapes has already finished in China. This year, the production has been somewhat delayed by the cold weather. In general, the harvest has been good, and in some cases, there has actually been a bumper harvest. This has pushed prices down later in the season. In a few areas, the cold has been so bad that the harvest has also been affected, resulting in a lower production and an earlier end of the season. However, in most cases there has been talk of a good harvest, even if it has reached the market later. In China, new varieties, like the seedless grapes and the Shine Muscat, have done especially well.

At the moment, grapes are mainly imported from Australia, Peru, Chile and South Africa. The massive fires in Australia have not yet had a major impact on exports to China. As a result, Australian grapes are also available on the Chinese market this year.

South Africa: Earlier season start; less export to Europe
The grape season is nearing its peak as the Western Cape comes into full production. The weather conditions are good, the sizes are also good and the season started early. This ensures larger volumes than usual at this time of the year. The quality of the white grapes from the Berg River region is “much better than normal,” according to industry representatives. In the Hexrivier valley there is a nice, average harvest and the fruit looks better than last year, when there was off-season rainfall during the harvest period. This year, rainfall during the harvest reduced the volume in Limpopo. 1.5 million fewer boxes have been packed.

At the end of week 1, around 23.5 million boxes (1 box = 4.5 kg) were exported. There has been a striking drop of exports to Europe (which accounts for 50% this year, compared to 57% last year) and an increase in exports to the Far East, Southeast Asia and North America thanks to the good size of the grapes. Grape growers have been trying to pack their products as quickly as possible because of the very poor electricity supply in the country, with regular power outages.

The second harvest estimate has been adjusted slightly downwards compared to the first estimate in October. This season, the grape production is estimated at between 59.55 and 66.30 million boxes.

Chile: Lower volumes due to dry weather; plenty of exports to US
The grape season started in Chile in mid-December. The flowering period was challenging, since a large part of the acreage devoted to grapes is located in a region that was affected by dry weather. In addition, there was some frost here and there, causing volumes to fall. The most important export markets for the country are the US and Asia. Growers are increasingly switching to licensed grapes because the export market (especially the US) demands it. This week, the first Chilean grapes arrived in the US by ship. The US is now fully in the import season and the volumes that are being shipped are growing. Chile expects to increase its market share in the US.

Peru: Growing production and many new varieties
The Peruvian season started a little later than normal. In December, the first Peruvian grapes arrived in the US to compensate for the declining domestic production. Chile started the season too early last year. They learned from that, so this season they started exporting only when the supply of California’s domestic production was already low. The country’s volumes continue to grow and there are more new varieties and fewer traditional varieties. The Red Globe remains the dominant grape variety in the country. The most important export market is the US.

United States: Transition from domestic grapes to South American imports
The market in the United States is switching from domestic grapes to South American imports. At the moment, prices are high because volumes are currently on the low side. In the coming weeks, however, volumes are expected to grow and prices will fall. Most grapes come from Peru and Chile, with some small volumes also from Brazil. The supply of red, seedless varieties is expected to be lower this season. The distribution of the Red Globe is also slower this season, but this has no negative impact on the market, since the volume is also lower.

Australia: Water management is becoming a challenge for growers
It is the peak season for Australian grape growers and water management is becoming a big issue, now that the dry weather and heat are starting to take a toll. The season kicked off a little later than expected due to the very unusual temperatures. Growers in Western Victoria expect a good volume, but what the quality will be like remains uncertain. The Australian Table Grape Association (ATGA) introduced a minimum ripening stage last year. For the Crimson, Flame, Red Globe and Thompson varieties, this means that at least 80% of the fruit must have a Brix of 16 degrees, while a Brix of 15.5 degrees applies to the Menindee, Sugraone and Superior.