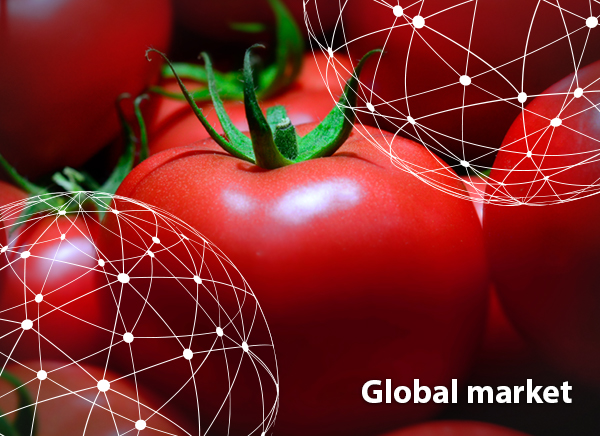 The global tomato market is currently marked by uncertainty. Many growers and traders are anxious about how the demand will develop after Easter. Now tomato prices are still rising, but will this also be the case after Easter?

In many countries in Western Europe and North America, the season is about to start again and the tomato supply is increasing. At the moment, traders are forced to rely on the retail and processing industry. The catering industry has come to a standstill and niche products are being hit the hardest by this. The extent to which prices now rise or fall strongly depends on the population’s ‘hoarding trends’, which varies from country to country.

The Netherlands: “Slow arrival of productions has been fortunate”
The news regarding the coronavirus are unpredictable, and this applies also to the current situation in the tomato market, which is very restless. Shortly after the impact of the corona bomb in the Netherlands in week 12, there was a lot of hoarding, with rising prices. Soon after there was a dip linked to stock saturation and prices collapsed. Now, with the Easter demand, prices are rising again, but nobody knows what is going to happen after Easter.

What was fortunate is that the Dutch productions started slowly. The lack of sunshine in January and February put a brake on the fruit production, which means that volumes are still limited in size. What is currently on offer is therefore (still) selling well, also in a traditionally important market like Germany. There’s a limited production in the Netherlands, but the supply from Spain is also limited as a result of all the problems caused by the coronavirus there, and the supply from Morocco stopped earlier than usual for the same reason.

The larger productions are expected to arrive in about 5-6 weeks and the question remains: what will the market do next? It is abundantly clear that tomato specialties in particular have been the hardest hit, as has been the case with other greenhouse products. Unfortunately, the catering industry is closed and distant destinations, such as the Middle East and the United States, cannot be reached. The larger segments, the real retail products, are better off, with the retail opting to create extra shelf space for bulk products. Consequently, there’s also less shelf space for specialties. Prices could be further affected on Easter Monday if nothing is sold but there is still harvesting.

Belgium: “Hoarding phase different in every country”
For the time of year, tomato prices in Belgium in weeks 13-14 have been “decent”. The fact that there have been slightly more domestic-oriented buyers could be a partial explanation for this. Traditionally, prices ahead of Easter fall, as the stocks are already there and exports have mostly taken place already. The hoarding phase that is already behind us in the Netherlands and Belgium has taken place in other European countries at other times, sometimes giving a boost to the demand from those places.

It is hoped that the market will stabilize, and that is also what is likely to happen, given the limited volumes. This, just like in the Netherlands, is due to slow growth as a result of the lack of sunshine in January and February. Still, what will actually happen remains a mystery, given that “no one really has experience with what’s going on around the world.”

Germany: Large volumes of domestic production available
In Germany, the domestic production is now noticeably increasing in terms of volume. Since this week, the tomato sector has been harvesting and marketing large quantities. Due to the lack of sunshine in January and February, the season was slightly delayed, but the good weather of the past few weeks has quickly made up for that. “We therefore expect good volumes and ditto product quality across the board,” says Carsten Knodt, greenhouse grower at Landgard. The German fruit and vegetable group grows fruit and vegetables on approximately 120 hectares. The tomato harvest is also in full swing in other horticultural regions, such as Knoblauchsland (Nuremberg region), Brandenburg and Mecklenburg-Western Pomerania.

Nevertheless, Dutch and Belgian tomatoes grown with artificial light still play an important role on the German market, especially in the retail and wholesale markets in the Ruhr region, where tomatoes from neighboring countries are traded in large volumes. In terms of pricing, the coronavirus outbreak has caused extreme market fluctuations: Prices for standard vegetables, including tomatoes, skyrocketed in mid-March. Now that the majority of the German federal states have closed their catering establishments, this product must be sold elsewhere and prices will logically fall. However, this picture differs per state.

France: Government calls consumers to buy French tomatoes
In these times of crisis, the French government is promoting the consumption of French products. There is therefore a great demand for French tomatoes. Prices have even risen above € 3.00 / kg in the case of tomatoes on the vine. For these reasons, many Dutch traders are also selling their tomatoes in France. There is still demand for Spanish tomatoes, but due to the weather conditions and problems in the logistics and labor, the volume is more limited.

Spain: Great demand and high prices, but what about after Easter?
The season in Spain is currently in full swing and started earlier than in previous years. Tomato sales have increased by 20% in the retail since the start of the coronavirus outbreak. After all, tomatoes are highly versatile in the kitchen. When people in some countries started hoarding in the first weeks, tomato sales grew by up to 180%. After those weeks, the demand stabilized somewhat. Sales are still higher than usual around this time of the year, but exporters are cautious, as sales are usually higher before Easter. People are especially curious about what will happen after Easter.

The social distancing protocols, the higher production costs and the increased demand have pushed prices up and created more movement in the free market, outside of established programs. Plum tomatoes, cherry tomatoes and cocktail tomatoes are the most expensive, while loose tomatoes and tomatoes on the vine are cheaper. It has become more difficult to sell second-class tomatoes now that the catering industry is closed.

Italy: Growers satisfied with the price of tomatoes
40% of the tomato production in Italy is in Sicily. A grower taking part in the integrated disease control program is satisfied with the sales of his tomatoes on the vine, which reached an average price of € 0.63 / kg. Meanwhile, he continues to harvest cherry (€ 1.20 / kg), Piccalilly (€ 0.90 / kg) and plum tomatoes (€ 1.25 / kg). The prices are fairly high around this period and both the quality and quantity are good, especially thanks to the mild winter. In the wholesale market in Vittoria, plum tomatoes are sold for € 2.61 / kg, cherry tomatoes cost € 1.50 / kg, smooth round tomatoes are sold for € 0.95 / kg and the price of mini plum tomatoes stands at € 1.87 € / kg.

The harvest is currently in full swing in Northern Italy. A number of growers here cultivate hydroponically in their greenhouses, and they find the quality of their on the vine, cocktail and cherry tomatoes to be great. Sales to the retail proceed normally, although difficulties have been reported in sales to wholesalers. In central Italy, the demand for tomatoes increases sharply between mid-April and late May. “We will start harvesting the local production in May,” says a grower. “Then the demand for tomatoes should drop again, but we’ll also see a reduction in the supply. The situation this year is different for the colored tomatoes that are normally intended for the catering sector. The demand is not getting off the ground and prices are falling.”

South Africa: Strong price increase for tomatoes
Tomato prices have increased by 58% in the last week, reaching an average level of € 0.49 / kg (ZAR 9.68), due to the low supply on the market. These high prices are expected to last for two weeks. Some regions in Limpopo have ceased production, now that autumn is approaching, while a region like Komatipoort (close to the Mozambique border) is starting with the winter production. South Africa has a continuous supply, with tomato production regions across the country, with a predominance of open ground crops. Only around East-London (Eastern Cape) is there protected cultivation in tunnels. More and more open ground growers are switching to cultivation under nets. The different production regions are increasingly overlapping, so price fluctuations are getting smaller.

United States: “People buy less than McDonald’s”
There are currently enough tomatoes on the US market. Stocks come from both domestic growers and from neighboring Mexico. This large supply of tomatoes has to do with a shift in the demand, or rather the loss of the demand from the food service and catering sector. A few weeks ago, supermarket sales increased, but after the “hoarding wave” passed, the market became quieter, and not all stocks can be sold to retailers. “People don’t buy the quantities McDonald’s usually does,” says a Texas grower. He expects the retail demand for his tomatoes to pick up again. Regarding the price, his statement is short and clear: “You can pay whatever you want at the moment.”

Canada: Growers concerned about market demand
The greenhouse production is increasing again in Canada. The peak in the season takes place between late May and July. The first estimates for this season’s volumes point to them being comparable to last year’s. The prices will also be similar. The demand on the market is also a cause of concern for the growers; however, online sales have increased. Greenhouse product sales appear to be a bit slower. It is difficult to make predictions at the moment. “This is all new ground to us,” says a grower.

Mexico: Exports to the US are not hindered by coronavirus
Fewer Roma tomatoes are coming from Mexico this year due to the weather conditions and the fewer number of plantations, as there was a lot of uncertainty about the new Suspension Agreement on tomatoes in the United States. Although prices have reached the lowest level since the start of 2020, this is a normal development in the season. Despite the virus, inspections upon entry into the United States continue, so exports remain possible.

China: Cherry tomatoes are gaining popularity
Tomatoes are grown in many areas of China, so the supply is very large. Currently, many tomatoes come from Sichuan, Yunnan, Shandong, Shaanxi and Gansu. As a result, there is enough supply on the market. The logistics remains a challenge at the moment and this is slowing down sales. Transport difficulties are another aftermath of the coronavirus.

The price has remained fairly stable in recent months, which is positive for the market. Since the new season is now starting for many production areas, the peak in the supply is expected in June. Currently, many large tomatoes are still grown, but the popularity of cherry tomatoes is rapidly increasing on the Chinese market. The demand is high and much is invested in further increasing the production. For example, many new greenhouses have been built to improve the quality and supply and thus meet the demand for cherry tomatoes.

Australia: Price for tomatoes on the vine lower due to larger volume
The value of tomatoes increased by 11% in the 2018-2019 season, while the volume decreased by 3%. 53% of the total production is intended for fresh consumption, while the other 47% goes to the processing industry. Of the 469,199 tons in the said season, 1,000 tons were exported and 899 tons were imported. The most important variety remains the field tomato (41%), followed by the Large Truss (35%), Cherry tomato (21%) and Roma (3%). One of the largest greenhouse tomato growers reported that the current production is going well, despite the low prices from November to January. Prices rose again in February and March. The price of tomatoes on the vine is generally lower because more is planted. Due to the dry weather in the south of the country, prices have occasionally risen sharply. Prices don’t appear to have risen as a result of hoarding in the Australian retail.