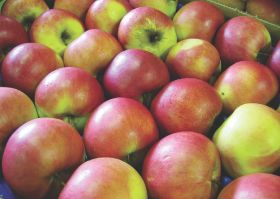 Adifficult season for Polish apple growers has been made even tougher by recent widespread frosts, with some producers reporting losses of up to 80 per cent.

The frosts, which hit in early May, were just the latest in a long line of challenges that the country’s apple growers have faced in 2019, according to Dominik Wozniak of Rajpol.

“This spring we have had several problems, not only from frosts,” he told Fruitnet. “After the extremely high crop we had in 2018, the trees were tired and there were not many flowers at the beginning of this season. In April we had almost no rain in Poland, which meant flowering started a little bit too early, and in not the best condition.”

This was compounded by some early frosts in mid-April, Wozniak continued, as well as unfavourable conditions at the beginning of May such as cold, windy and wet days, making it more difficult for bees to pollinate the crops.

“After that, on 7-8 May, frosts hit most of the fruit-growing areas,” he outlined. “Immediately after the frosts things didn’t look so bad, with growers talking about losses of around 20-30 per cent. However, now after a couple of weeks we can say that the reduction will be on levels of anything between 30 per cent and 80 per cent. Of course there are big differences between orchards – some growers may have lost up to 90 per cent and some ‘only’ 30 per cent.”

In terms of variety, the most affected is Idared, according to Wozniak, with only 20 per cent of the normal crop expected, while the grouping of Jonagold, Jonagored and Jonaprice should see 30 per cent of its normal volumes harvested.

Ligol should see around 30 per cent of its normal crop harvested, while Szampion should come in at 50 per cent of normal volumes and Gala and Golden Delicious will turn out at 70 per cent.

“The next couple of weeks will be very important for the coming 2019 crop,” he added. “We cannot turn back time but growers must do the best job to save what is still on the trees.”

Jan Nowakowski of Genesis Fresh pointed out that it was not just Poland that was enduring a difficult season.

“Observing the situation across western Europe, the crop won’t be high there either,” he told Fruitnet. “Italy, the Netherlands, Belgium and even France will face lower crop levels for the coming season.

“Prices will be higher, that’s for sure, but at what level? Well, we will have to see what the volumes of Chinese and Southern Hemisphere apples are later in the season.”

Back in Poland, Nowakowski said that while estimates are currently for volumes to fall on the five-year average, there could still be further issues affecting the final total.

“We still might have hailstorms during the summer time,” he warned. “For now, I can tell [the volumes] will be less than the five-year average, 20-25 per cent lower.

“The remaining season was and is demanding and devastating for every apple grower in Europe,” Nowakowski added. “Let’s hope that the new season will give us a high enough quantity of apples and price levels to cover the cost of production.”