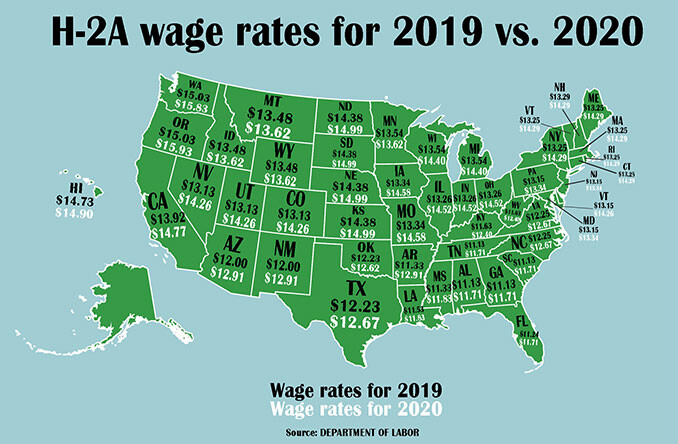 Another mandated increase in H-2A guest farmworker wage rates has made Congressional action on farm labor reform even more critical, according to the Agriculture Workforce Coalition.

The coalition, a group of organizations that include Western Growers, the United Fresh Produce Association, U.S. Apple Association and several other produce grower groups, is urging the U.S. Senate to take up legislation to solve the agricultural labor crisis in a letter to lawmakers.

The Adverse Effect Wage Rate (AEWR) is the required rate for farmers who use the H-2A program, and the Department of Labor on Jan. 2 mandated an increase that will average 6% across the nation, according to a news release. Some regions will be required to increase wages close to 10%. The increase follows a 2019 wage rate increase for the H-2A program that averaged 6.2%.

The coalition told the Senate that the increase will make it difficult for some farms to continue operating, following a year of natural disasters, trade disruptions, low commodity prices and declining farm income, according to a news release.

The coalition urged the Senate to consider the effects of the increase on U.S. farmers, and asked for an alternative that would ensure a level playing field for farmers and ranchers, making them more competitive with foreign producers.

“The AEWR implemented today will immediately increase farmers’ labor costs by an average of 6% while revenues for agricultural goods continue to diminish due to an influx of cheaply produced imports flooding American markets,” according to the release.

Over the past five years, according to the release, the AEWR has increased nationwide by 17% on average while revenues for fruits and nuts have increased only 3% and vegetables and melons have seen no revenue increases.

“While American farmers are required to pay their H-2A employees more and more each year, the U.S. continues to import more and more produce from Mexico and Central and South America, where workers are paid a fraction of U.S. wage rates,” according to the Agricultural Workforce Coalition release.

The coalition asked the Senate for a legislative solution “that ensures the competitiveness of America’s farmers and ranchers, stabilizes the current U.S. agricultural workforce and provides guest worker program access to year-round agriculture sectors,” according to the release.

The letter did not reference specific legislation. The U.S. House of Representatives passed the Farm Workforce Modernization Act Dec. 11, but grower groups have said they want to improve some aspects of that legislation when the Senate debates the bill.