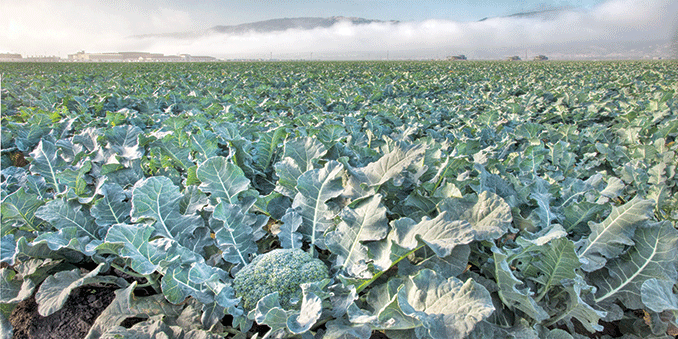 A winter of rain, occasional hail and cold temperatures across California will likely throw wrenches into this year’s spring vegetable supplies, growers say.

The company grows spring vegetables in Brawley, Calif.; Yuma, Ariz.; and Mexico from November through March, and then grows in the Salinas Valley from March through November, she said.

“At this point, our quality looks good, but with the excess rain we have received the last few weeks, we feel the quality and transition to the Salinas Valley will impact the supplies in early spring,” Pizarro-Villalobos said.

She expects broccoli to begin in Salinas Valley the week of March 18, cauliflower around March 23, and head lettuce the week of April 15.

Production volumes were steady last year, she said, and she expects the same this year.

Cooler temperatures and rain are causing issues in both growing areas for Salinas-based Coastline Family Farms.

The grower began harvesting broccoli, cauliflower, green and red leaf lettuce and butter, iceberg and romaine lettuces in mid- to late November mostly in Brawley, and that should finish around late March or so, said Mark McBride, a salesman.

Harvesting in Salinas should begin in mid- to late April, with romaine and iceberg lettuce around April 15, he said.

“It’s been a long time since winter has been as wet and cold as we had this year,” he said. “We anticipate volumes to be less consistent, and definitely more erratic.”

Acreage is similar to last year’s, he said.

He expected to start harvesting broccoli and cauliflower in Salinas in early to mid-March, and iceberg and red and green leaf lettuces in April.

Production volumes were steady last year, but this year is too early to tell, Clausen said, particularly because of the weather.

“Everything has been a little bit behind,” he said. “So, it could be a very difficult transition between Yuma and Salinas. And Yuma was impacted as well (from the weather).”

Lettuce is a substantial player in the $4.4 billion agriculture industry in Salinas’ Monterey County. Leaf lettuce, the No. 1 crop in 2017, was valued at $830 million, while head lettuce was $503 million, according to the county’s most recent crop report.

Monterey County Agricultural Commissioner Henry Gonzales said the rain has “put a damper” on initial plantings. Some growers, though, slipped planting in between February rainstorms.

Celery is the hot topic these days, said Russ Widerburg, sales manager for Oxnard, Calif.-based Boskovich Farms. Celery started in early November and he expects it to last through the spring.

“It’s a popular conversation because the market has been so strong since it started,” he said.

Oxnard has had frequent rain and cold temperatures this season, and that will cause issues, Widerburg said.

Oxnard has received 11.4 inches of rain since October, 151% of normal for the period to date as of Feb. 24, according to the National Weather Service.

“You miss plantings because you can’t prep the ground as normal,” Widerburg said. “You will see planting gaps into the spring that will cause shortages and inconsistency in supplies.”

Ventura County led the state in celery production in 2017, according to the California Department of Food and Agriculture. In the county, the vegetable was valued at over $210 million that year from about 13,200 acres, according to the county’s crop report.

Jose Gonzalez, who handles sales for Lompoc-based Big E Produce, said morning temperatures have been around 30-32 degrees and it has hailed and rained.

That has upset the normal planting schedules, he added. Broccolini planted between Irvine, Calif., and Santa Ana, Calif., got soaked and decay set in.

The company also grows cauliflower, celery, red and green leaf lettuce and romaine. Harvest overall will likely get pushed back to the second week of April from its typical end-of-March start date, Gonzalez said.

Production, which was decent last year, will also probably be lower.

By The Packer Staff