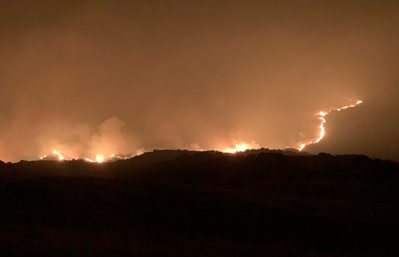 Salinas Crops Appear To Have Escaped Damage From Fires

With many different fires currently engulfing Northern California, agricultural regions have not escaped unscathed as the hills on the west side of the Salinas Valley have been burning since Aug. 16 and some of the wine districts further north also are in fire zones.  Currently, however, it appears that no Salinas Valley vegetable production has been lost.

Lightning strikes over the weekend of Aug. 15-16 caused many fires throughout California, including the so-called River Fire in the hills west of Salinas. The fires are mostly in remote hills and are not threatening crops, though they have engulfed some homes and structures. A smoky valley with lots of ash is the main problems for vegetable growers, causing strategic harvesting decisions as the more impacted fields are avoided. But aside from that, vegetable experts say the direct impact on their crops is minimal.

Jason Lathos, manager of commodities for Church Bros. LLC in Salinas, CA, said it appears that smoke does not affect the quality or taste of vegetables. He said there is lots of ash, but that can be shaken off the crops in field operations or eliminated as the vegetable go through processing facilities. He added that all producers are in the same boat with the smoke from these fires covering the valley and even traveling through California into other states.

Lathos, who was on evacuation notice to leave his own home late last week, said the fire “was too close for comfort” but it appears his house was not damaged. On Monday, Aug. 24, he told The Produce News that the worst of the fire was hopefully behind them as another round of forecasted lightning strikes did not develop the night before.

“We’re expecting to get back in the house today,” he said, adding that the Church Bros. headquarters, which is located in Salinas on Highway 68, the road to Monterey, had an evacuation warning the previous week but never received evacuation orders.

As far as the crops are concerned, Lathos said the fires were preceded by a week of very hot temperatures that did alter production schedules. He said harvesting volumes were disrupted as the heat brought some fields on faster than anticipated.

Mark McBride of Coastline Family Farms, also in Salinas, noted that the uneven production pattern caused by the heat was exacerbated by the smoky conditions, which also disrupted harvesting schedules. He said worker safety is top of mind, and harvesting crews worked shorter days or didn’t go into fields with unhealthful air conditions.

The longtime veteran said that August typically features less production as growers cut back their planting schedules because of the many regional and home-grown deals around the country during the peak of the summer. He anticipated an increase in volume for many different items when the calendar turns to September.

Already working from home because of COVID-19, McBride said the Salinas fire has just piled on to what has been an unfortunate year. “The fire has pushed COVID to the background. I’m tired of 2020, it’s been a bitch of a year.”

Lathos seemingly agreed with the sentiment, noting that Church Brothers has had to get “very creative” as it operated very heavily in the foodservice sector. He said that business has started to come back with additional sales in recent weeks as some school foodservice operations around the country have started to open, and restaurants pivot to outdoor dining.

He did express concern for the coming colder months, as he wondered if consumers would continue to dine outside as the temperature drops. But he remains optimistic. “Produce people are tough people,” he said. “We will adapt.”

By The Produce News