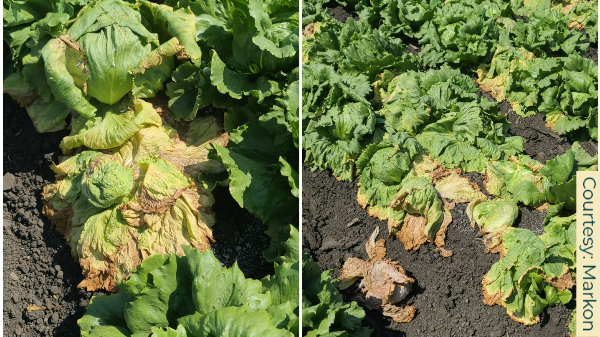 The fires near Salinas, CA, growing regions in August continue to cause problems for growers, even after many have been contained.

Mark Shaw, vice president of operations for Markon Cooperative, BB #:123315 Salinas, said ashes from the fires remain a problem for many crops.

Shaw said Markon has seen ash affect leaf crops the most, with inspectors finding ashes down in the hearts of plants, which can’t be removed by harvest crews.

“The only way to remove the ash is to remove the butt end of the plant and wash the remaining leaves with cool clean water,” he said. “Any value added packs are virtually clear of ash due to the washing systems processors have in place.”

Iceberg Lettuce
Supplies are decreasing, and the market is on the rise due to decreasing harvestable supplies.
-Two major challenges growers are facing, Impatiens Necrotic Spot Virus (INSV) and Sclerotinia Disease;
-Both challenges either kill the plant before harvest, or affects quality in such a manner the plant is not harvestable;
-Expect the iceberg market to continue to move upward during the week of September 7, and more than likely steady out the following week.

Romaine Lettuce
Suppliers will be limited through mid-September.
-Abnormally high heat received in mid-August has affecting quality, as well as increased demand from the USDA Farmers to Families Food Box Program have reduce available open market supplies;
-California’s recent heatwave on the Central Coast has created heat related defects such as internal burn, seeder, sun scalding, and dehydration;
-Expect these defects to persist well into September due another heat spike expected on the Central Coast starting Saturday, September 5 through Monday, September 7.

Tender Leaf Varieties
Due to recent warm weather, tender leaf quality and supply levels have been affected.
-Dehydration, early breakdown, shortened shelf-life, and yellowing leaves are quality-related concerns due to higher-than-normal temperatures;
-Spinach and Arugula are especially susceptible to heat-related defects;
-Volume has been greatly impacted by recent heat waves;
-Expect tight supplies on Spinach and Arugula through mid-September, as more hot weather is expected in the Salinas Valley over the next week.

Broccoli
Supplies are tightening and the market has been on a consistent slow rise over the past two weeks.
-As of Friday, September 4, the market for a domestic crown was sitting in the mid-upper teens price range;
-Abnormally high temperatures on California’s Central Coast from Thursday through Monday, August 13 to 17 stressed the broccoli plants considerably, to the point it slowed maturity considerably;
-Quality defects as well as deceased maturity has continued to reduce harvestable yields over the past two weeks, and expect to persist through mid-September;
-Quality defects: dehydration, hollow core, pin rot and brown bead have been prevalent.

Cauliflower
Supplies are more plentiful than broccoli.
-Market has been steady at the bottom for 5 weeks now, but ready to start making a move upward;
-Yields are down due to abnormally warm temps reducing plant maturity and created some quality defects;
-Market is not expected move as fast or maintain itself as long as the broccoli market has.