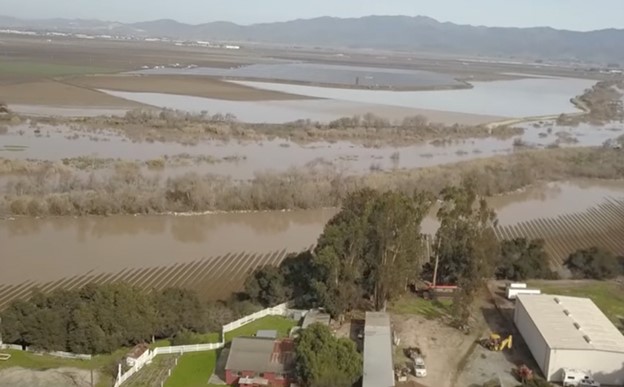 California has been pummeled by several atmospheric river events over the past two to three weeks. The resultant floods in the Salinas Valley, which accounts for roughly 80 percent of the nation’s vegetable production from April to early July, are expected to lead to product shortages and high markets in the spring, according to Markon.

Atmospheric rivers are concentrated streams of water vapor originating over the Hawaiian tropics, ranging about 100 to 250 miles in width and follow a tight path toward western North America.

These rivers of moisture-laden air flow make landfall five to six times a year in California in a normal winter season. Although potent atmospheric rivers can cause extreme rainfall with catastrophic flooding and mudslides, many are weak and provide beneficial rain to California every winter.

On average, about 30 percent to 50 percent of annual precipitation on North America’s West Coast comes from a handful of atmospheric river events, according to the National Weather Service.

Some areas of California have received 400 percent to 600 percent above historical rainfall amounts, causing widespread flooding. As of Jan. 12, it is estimated that upwards of 20,000 acres of plantable vegetable ground have been flooded in the Salinas Valley, and more rain is on the way.

From The Produce News