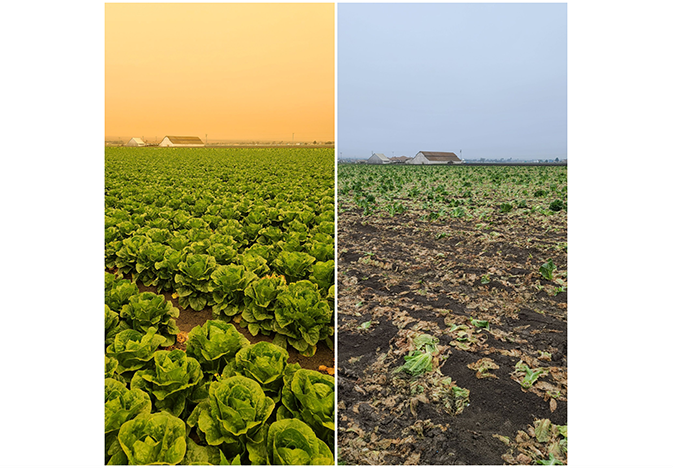 Salinas Moves Toward business As Usual After Wildfires

“Harvest was impacted considerably by the wildfires due to both the smoke and ash as well as the heat wave we experienced leading up to the fires,” Josh Ruiz, vice president of agricultural operations for Salinas-based Church Brothers Farms, said Aug. 27. “However, the effects on product have improved substantially over the last weekend.”

Mark Shaw, vice president of operations for Salinas-based Markon Cooperative, noted that air quality began getting better Aug. 21 and further cleaned up in the following days.

“Air quality was 100% improved, where you have blue sky versus brown sky, so it was definitely a difference,” Shaw said Aug. 26. “You walk out, you don’t smell smoke; you walk out, and it’s not raining white ash on top of you.”

Monterey, Calif.-based Pro*Act described in an update on its website Aug. 26 the developments that contributed to the improvement of the situation.

“The recent heavy coastal marine layer has been a welcome relief to fire suppression efforts near the Salinas Valley, bringing containment close to 50% for both fires with much less ash currently being deposited in the Salinas Valley,” Pro*Act wrote. “Growers are doing their best to keep the ash out of cartons on whole commodity supplies, with harvest crews trimming down and shaking ash off product as best they can before putting it into the carton.”

Shaw also noted that ash remains an issue for open-head items in particular. Affected items will need to be washed thoroughly with clean, cold water to remove the ash.

“Our guess is going to be we’re going to deal with an ash problem for the next four weeks,” Shaw said.

Other than dealing with ash that was already in the fields, however, the situation in Salinas was mostly back to normal, Shaw said. Ruiz expressed a similar

“It looks much, much better than where we were last week,” Shaw said. “It was just horrible last week.”