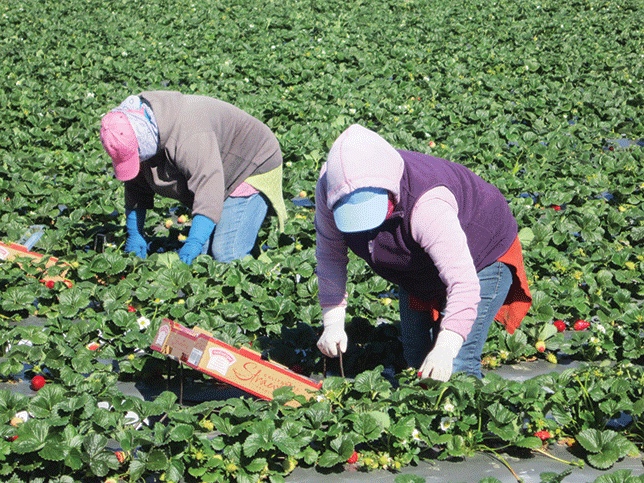 Strawberry growers in the Golden State, including in its No. 2 growing region of Santa Maria, have been producing greater volumes with higher-yield varieties, and this year could be a banner year.

“With normal weather, weekly shipment volume from April 15 to Oct. 31 is likely to equal or exceed the three-year average,” the Watsonville-based California Strawberry Commission said on its website. Strawberry volumes reached record numbers for the past three years in total, according to the commission, and increased 6%.

It’s the result of a trend in which growers are growing more but with less acreage, according to the commission, by increasing acres of higher-yielding varieties. The commission said acreage statewide is down 12% in the three-year time frame. “You can consolidate all your operations onto a smaller footprint.” While the cost of land is always a concern, O’Donnell said labor costs are the majority of a strawberry grower’s operation, and can also be a motivator to plant for greater volume.

“If you’ve got higher-yield varieties, there’s more fruit to pick, and generally the workforce that’s doing the harvesting likes to work in fields where plants are healthy and there’s an abundance of fruit to pick,” she said.

Two of the three top-yielding varieties in production yield studies conducted in Watsonville by the University of California, Davis, include the monterey variety, producing 10,554 cartons per acre, and the san andreas variety, which yielded 10,414 cartons per acre. O’Donnell said the commission has noticed those varieties as well as some proprietary ones from growers.

“We’re seeing more fruit per acre from when these fruits are planted,” she said. A newer variety, the cabrillo, was reported as producing 11,605 cartons per acre in recent tests. Those higher-producing varieties can work against the industry under certain conditions.

Last year, freezing weather in February delayed fruit harvests until California’s three strawberry districts came online with fruit, including those high-yield varieties, close in time with each other. That was around May 11, when production hit nearly 10 million trays and exceeded the three-year average of just over 8 million trays.

Annual production jumped 9% to nearly 225 million trays, but the f.o.b. price per tray was only $9.10, the lowest since 2006, according to the commission, which uses U.S. Department of Agriculture data.

“Strawberries supplies are very price sensitive — so when you have a very high supply, it pushes the price down,” O’Donnell said.

This year, she said weather has put statewide production behind last year at this time, and growers expect some losses. As of March 23, harvests were at about 7.2 million trays — significantly behind the nearly 11.9 million trays harvested at the same time last year.

In Santa Maria, about 637,000 crates of berries have been produced compared to more than 2.4 million crates a year ago. Timing, however, is on track with normal years, she said.

In 2018, Santa Maria’s strawberries accounted for more than 33% of the state’s total production — about 70.4 million crates, according to the commission.

Tom Jones, president of Providence Farms in Santa Maria, a mostly organic strawberry producer on 260 acres, which grows and ships through California Giant Berry Farms, said the strawberry volume on its way could be an issue this year, but it depends on fruit amounts and timing.

“When we all come together at the same time like last year, that will be a challenge,” Jones said. Yields have increased for Providence Farms, he said, as the UC Davis program has emphasized developing higher producing varieties.