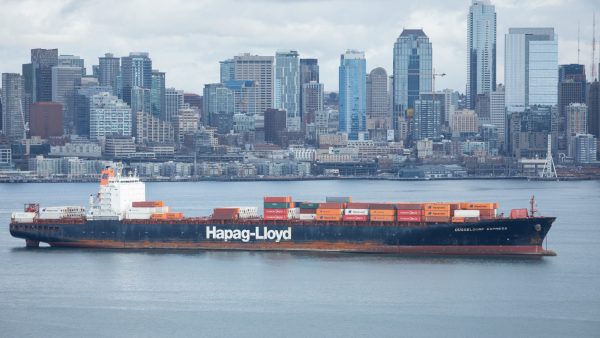 Seattle-Tacoma To Congested Southern California Ports: We Feel Your Pain

The waterfall effect from Southern California port congestion has caused an ebb of exports in the Pacific Northwest.

“When … there is congestion at those other gateways, the vessel schedules are so far off that when they get to Seattle-Tacoma, the window of time for them to work the vessel and get back to Asia has been [significantly reduced]. They’re in a rush to turn that vessel around to try and get that vessel back on schedule. It has created problems for us,” Wolfe said in response to a question from American Shipper regarding the reason for the export drop.

“The exporters have a very difficult time planning to get their exports into the terminal in time to meet that vessel. The windows for delivery for these vessels are so tight oftentimes they miss that window,” he said during a videoconference Wednesday. “That’s the primary reason for the drop, the vessel schedules being so far off. We’re trying to address that issue because … we really value the exports that move through our gateway.

“So we’re working with the terminal operators to see if they can do a better job of forecasting when those vessels are going to call their terminal and open up a broader window for delivery of the exports for those vessels when they are at berth,” Wolfe said.

The NWSA ports of Seattle and Tacoma, Washington, do not have the congestion issues plaguing Los Angeles and Long Beach. And Wolfe pointed out the Southern California ports have more than double the weekly service calls NWSA has.

“On an annualized basis, LA and Long Beach combined handle upwards of 19 million twenty-foot equivalent containers as compared to our Seattle-Tacoma gateway, which handles about … 3.7, 3.8 [million TEUs],” he said, adding the vessels calling the San Pedro Bay ports also tend to be larger than those in the Pacific Northwest and thus take longer to discharge cargo.

And so those delays experienced at other West Coast ports are passed on to Seattle-Tacoma.

“Of the roughly 20 or so services that call our gateway on a weekly basis, only a handful of those services call Seattle-Tacoma as the first port of call on the West Coast. So they’re first calling Southern California and then coming up the coast to Seattle-Tacoma or, alternatively, calling a Canadian port and swinging down to Seattle-Tacoma,” Wolfe explained.

The situation is further complicated by equipment availability — or the lack thereof.

“Because of the significant demand in imports into the country from Asia, the vessel operators are increasing the eastbound rates that they charge to the cargo owners for the movement of goods from Asia into the U.S., and that is creating greater profitability for the carriers,” Wolfe said. “And as a result of that, they are anxious to get those vessels with the equipment, whether it’s a load or an empty, back to Asia so they can take advantage of the higher rates that they’re enjoying today in the marketplace.

“So it’s simple economics. That also is part of the challenge,” he said. “It’s a really important issue to tackle. Exports are very important to help drive the health of our economy. We have a very strong export market in this gateway. Part of the challenge has been with all of the congestion problems … that has had a negative effect on the export opportunities.”

“We’re well positioned in the marketplace. We have excess capacity to accept additional cargo and we are a less congested gateway than many of the other gateways,” Wolfe said.

Port of Seattle Commission President Fred Felleman noted the NWSA gateway is a “discretionary port,” meaning it’s usually not the first U.S. call and about three-fourths of imported goods are then transported east rather than remain in the Pacific Northwest.

“It also means that we have a much more competitive situation because if your goal is to just get to Chicago, you can do that from any number of ports, and therefore we have to be scrappy and continue to invest in our infrastructure to be able to provide the quality of service that would make us a priority,” Felleman said.