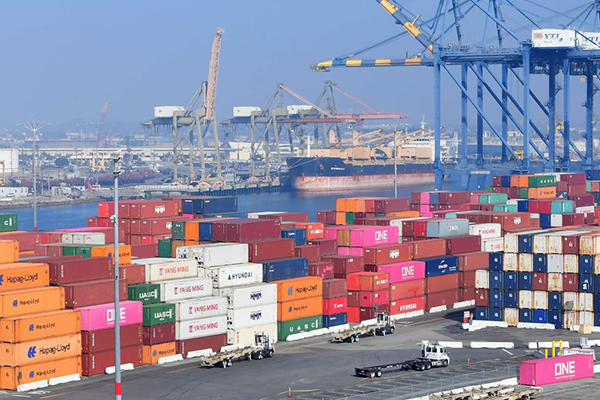 CALIFORNIA & SHANGHAI, CHINA – Last week, we reported delays were seen at the Shanghai port in China, causing a decline in cargo volume at the Port of Los Angeles in California. While the lockdown was expected to relax on June 1, news has surfaced that ship operators are trying to add millions of new containers as boxes are stuck on liners and at ports as shipping moves into its busiest period.

Gene Seroka, Executive Director, Port of Los Angeles “Importers are now bringing in cargo just in case, not just in time, and it makes up for more boxes sitting at the port,” said Gene Seroka, Executive Director of the Port of Los Angeles. “They will continue to be tight until early next year if we don’t increase the velocity of getting them off the ships and off the port.”

As The Wall Street Journal reported, ship brokers and consultants estimate about 12 percent of the world’s box ships are stuck outside congested ports for weeks longer than normal, and inland distribution—especially in the U.S.—is still hampered by a lack of trains, truck drivers, and limited warehousing space. Further along the supply chain, rail drivers and wagons are seeing a slowdown.

As pandemic shutdowns continue in China, news has surfaced that ship operators are trying to add millions of new containers as boxes are stuck on liners and at ports as shipping moves into its busiest period.

This increase in volume follows as big American retailers such as Walmart and Amazon see surging shopper demand for Asian imports, continued the source.

Lars Jensen, Chief Executive Officer, Vespucci Maritime“At export ports, the Shanghai ships wait longer to get loaded, and at import ports like Los Angeles, they are stuck because there is no space at container depots,” said Lars Jensen, Chief Executive of Denmark-based consulting firm Vespucci Maritime. “There were enough containers and a lot more were added, but it won’t help if every part of the supply chain moves slower.”

While there are still concerns about timing along the supply chain, there are some positives coming to light. For instance, noted the source, containers are easier to be obtained, and the line of ships waiting to dock at Los Angeles and Long Beach is around 30, which is down from more than 100 back in January.

Ship executives have also commented that the added container volume has helped keep freight rates this year at an average of $8,000 per box on a ship from China to the U.S. West Coast. That rate is less than half the freight cost from late last year.