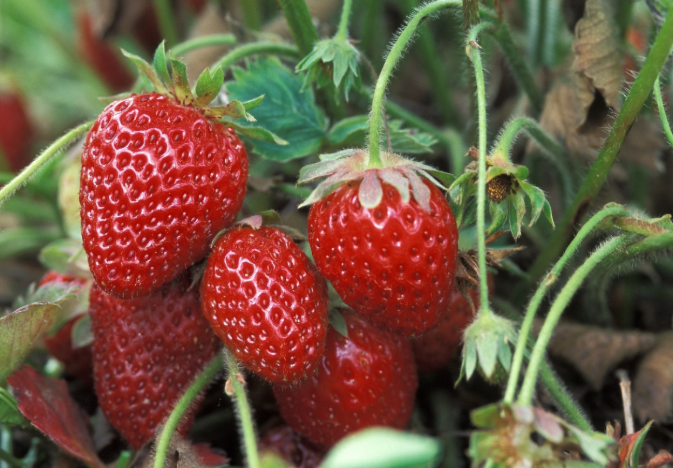 Rainy weather kept a damper on California’s strawberry volume throughout the winter and late spring, but grower-shippers said shipments were rebounding as summer approached.

California’s growers had shipped about 73.5 million trays of strawberries as of early June, down from 82.3 million trays picked a year earlier, according to the Watsonville-based California Strawberry Commission.

Acreage was down, too.

Growers planted 25,704 acres of strawberries for winter, spring and summer production this year, down 6.3% from last year’s 27,426 acres.

But the commission said that volume could end up close to last year’s 225 million trays thanks to new, high-yielding strawberry varieties.

“Much of the spring crop never made it to the produce department but instead ended up in the furrow or in a juice tray headed for processing,” she said.

But Jewell was hopeful for a productive summer.

“The plants are finally cleaned up, and we hope the rain is gone for the rest of the season,” she said.

The state’s volume was cut in half during the week leading into the Memorial Day holiday, Jewell said, but the numbers were catching up by early June.

“We are coming into peak strawberry volume here in the Watsonville/Salinas area,” she said, “so we’re really hoping our trading partners stick with us all summer and promote our fresh berries.”

The strawberry harvest got underway in Watsonville a few weeks later than usual, but by the first week of June, things were “running good,” said Jim Grabowski, merchandising manager for Watsonville-based Well-Pict Inc.

Picking should continue in Watsonville until late October, or until fall rains arrive, he said.

Rain this winter and spring fell when picking was not yet underway and should help ensure high-quality berries since the precipitation replenished aquifers and groundwater supplies and helped cleanse the soil, he said.

Pricing was average for the time period, he added.

F.o.b. prices for trays of eight 1-pound clamshell containers were mostly $8-9 as of early June, according to the U.S. Department of Agriculture. A year earlier, they were mostly $6-7.

Following rainstorms in mid- and late May, some ranches had to strip off all their ripe fruit, but they were ready to go the following week, he said.

“With strawberries, you lose a temporary deal, but it keeps coming at you,” he said.

“The yields are much higher on the varieties we have now,” he said.

Even though strawberries have been promoted for several months, they’re still a good-selling summer fruit item, Well-Pict’s Grabowski said, and he encouraged retailers to continue to promote throughout the season.

Promotable volume should be available for the Fourth of July, he said.