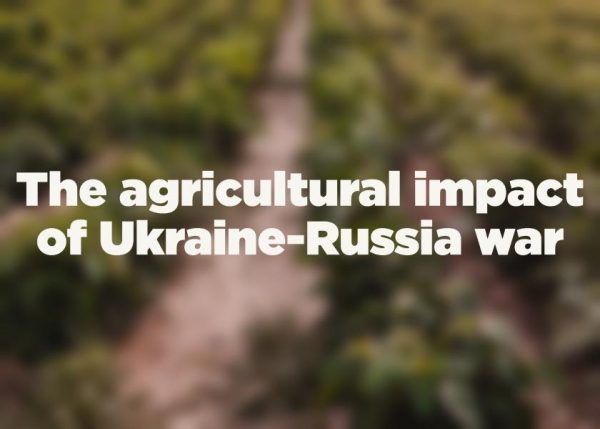 The IFPA Puts Agricultural Impact Of Ukraine-Russia War Into Focus

It’s day eight of the Ukraine-Russia crisis turned war, and both tensions and the death toll continue to rise. CNN, citing Ukraine’s Emergency Service, reports that more than 2,000 Ukrainian civilians have been killed during Russia’s ongoing invasion.

President Biden, the U.S. government and countries around the globe have condemned Russia’s invasion and continue to impose sanctions aimed at constraining the Russian economy in support of Ukraine.

As the situation unfolds, the U.S. considers the economic impact the war may have on the country’s already beleaguered supply chain, rising inflationary pressures, oil and natural gas prices, and more.

To learn more about how the crisis may impact the produce industry, The Packer recently sat down with Max Teplitski, chief science officer of the International Fresh Produce Association.

What is the potential impact of the Ukraine-Russia crisis on U.S. agriculture in general and the produce industry specifically?

Teplitski: These are two very different economies. Ukraine [considered the ‘breadbasket of Europe’] is one of the largest agricultural producers, of mostly grain [wheat and corn] and oil seeds. The [European Union] is Ukraine’s main trade partner, accounting for roughly half of its agricultural trade.

As it relates to horticultural commodities, Ukraine has a bumper crop of apples this year, but they have mostly been shipped. In terms of U.S. horticultural exports to Ukraine, it’s almonds, vegetable and grain seeds, as well as pesticides, that will be most impacted by the war.

Since Russia’s invasion of Crimea in 2014, Western sanctions, as well as Russia’s ‘reverse sanctions,’ have negatively impacted Russia’s economy, including the agricultural sector. Unlike Ukraine, which is looking to integrate itself into the global economy, Russia has been building a ‘citadel’ economy, with a remarkably diversified portfolio of agricultural imports, with Turkey, Iran, Germany, the Republic of Georgia and Moldova as some of its major suppliers of fresh produce.

Today, it imports less than 1% of its food-based agricultural products from the U.S. So, it’s unlikely that sanctions will have a direct impact on the U.S. produce industry. However, given that Russia is an approximately $20-$30 billion market for agricultural commodities, some rebalancing will have to occur.

As additional sanctions are imposed on Russia, how might retaliatory actions impact the U.S. economy and our already challenged supply chain?

Teplitski: At present, all of Ukraine’s grain exports are stuck in ports along the Black Sea and Sea of Azov, and all imports are under Russian threat. In terms of horticultural trade, Moldova, the Republic of Georgia, Ecuador, Turkey and Germany will be most impacted by the war, since they have significant trade relationships with both countries.

As we get closer to planting season in Ukraine, the impact of the war on U.S. agriculture will most likely be felt by seed and agricultural input producers, as those are the highest-ticket items that are being exported from the U.S. to Ukraine. Winter wheat and canola are already in the ground in Eastern and Southeastern Ukraine, with other cool-season crops [such as potatoes, sugar beets, carrots and cabbage] due in the ground within a month or so.

It has been announced that the world’s largest shipping companies are cutting ties with Russia, which means more containers and vessels may be freed up on the global market. There’s a possibility that this may alleviate some of the global issues via marine freight. Clearly, Russia’s daily launches of ballistic missiles across the continent completely disrupted air traffic in that part of the world.

Russia is also one of the significant importers of cars, and with European car manufacturers severing their ties with Russia, this may mean that the starved car market in the U.S. may get an infusion of vehicles. I am also watching the price of gold, as Russia is expected to start dumping some of its gold reserves to access foreign currency.