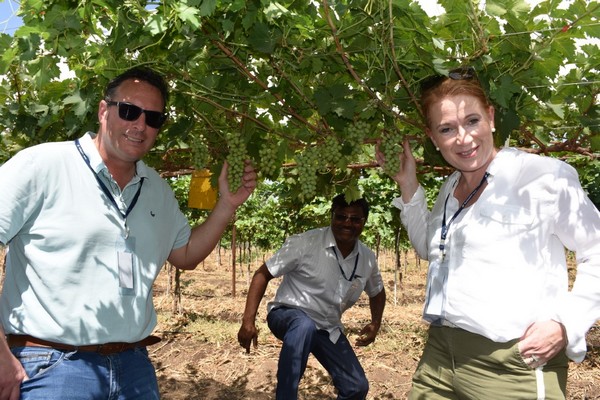 Indian grape exports came to a sudden halt a couple of weeks ago when the Indian Prime Minister gave the instruction for the country to go into lockdown. Unlike other countries the people had no time to prepare for this.

For fresh produce grower and exporter Jupiter Group it meant that only 2/3 of their Indian grapes were exported. “In India the country shut down within a day, whereas in South Africa they had four days to prepare. We had grapes ready to go and some in storage already packed, so we were able to continue to ship some grapes, unfortunately around 1/3 of our volume will not be exported, the effect of this won’t be seen immediately yet as there will be arrivals for a few more weeks,” explains Mark Tweddle CEO of the company.

Agriculture, as in other countries is classed as an essential industry in India. Within the country everything is moving but only within the local market. It is very challenging for producers particularly following on from the late monsoons in November and now the loss of the late part of the season. They do have a local market though and 94% of the grapes are sold within it.

He continues, “There are however success stories in India for table grape too; the ARRA 15 (ARRA Sweeties™) has performed particularly well despite the challenging Indian monsoon season, when compared against traditional white varieties. For the small majority of ARRA affected by the weather conditions in November, early February pruning allows a second crop toward the end of May, which does give a positively unique advantage against other grape varieties.”

South Africa
South Africa is in a 21-day lock down where agriculture is allowed to carry on but with restricted movement, so people have to stay where they are. “It is right at the start of our citrus season from South Africa, we have finished lemons and the Star Ruby harvest coincided with the start of the lock down process but it continues to work very well at the moment. There are delays at the ports because they are only allowing one ship in at a time, normally they would load multiple ships at once, so it’s not that the ports are not working, just that things are moving more slowly.

“Most of the staff at the packhouses in South Africa are local but the difficulties are seen in transportation. For our people we are supporting them with the relevant PPE, daily updates from the leadership team and guidance around their government’s advice. All our farm staff are based on the farm and all of our pack house staff are kitted out with face shields instead of masks, we shipped all of the equipment that we had in Chile over to South Africa for the start of the citrus season which was in itself a challenge, the bigger challenge now is trying to source more. All we can do is continue to give them all the appropriate training in this new situation to keep them safe, and in the usual Jupiter way, bring smiles to faces through our communication channels.”

Chile
Chile was also a challenge for Jupiter and the season there just finished on Monday, two weeks earlier than normal. “The early stop was a combination of fruit maturity and staff availability. The ports in Chile were also challenging as there were threats of strikes and they are running slower than normal.

Volatile currencies
The value of the Pound against a number of currencies has been very sporadic in the last few weeks and months, “It has recovered against the US Dollar in the last week, but at one stage it was 8% down against both the US Dollar and the Euro, but it gained again against other currencies such as the Rand which dropped 25% and the Chilean Peso 20%. It just shows how the uncertainty around the world at the moment makes currencies very volatile.

Logistics
“When the virus first hit Europe and the UK, the biggest issue was logistics, getting trucks across the borders, the EU got involved and made that easier but the problem is also finding drivers who are prepared to drive across Europe within the current climate. Now it is about finding backhaul and the cost has gone up because of this.

Increased demand for citrus
“The most positive thing coming out of this is the increased demand for citrus fruits, oranges were a product in decline and depending on which country you look at there is an increase in demand of between 40-70% which is very positive for the citrus industry on a whole. When the mainstream news is featuring the increase in price for the frozen orange juice futures market, it just shows that we’re in unprecedented times. Consumers will also get into the habit of buying more citrus and this habit will continue after all this is over. The COVID-19 crisis will increase the awareness of the need for fresh produce to support a healthy immune system and give our bodies better abilities to fight off illness too.”