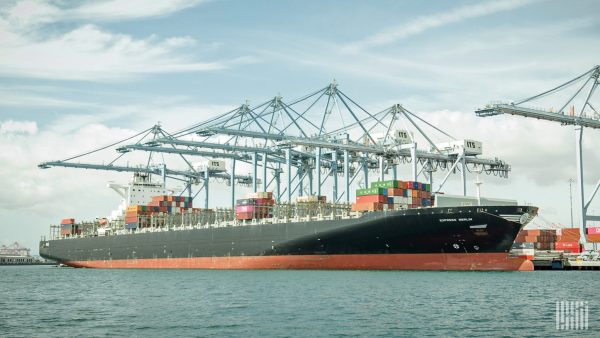 War Of Words Escalates As Exporters Scramble For Scarce Containers

US regulators under pressure to intervene on behalf of exporters

A war of words is heating up over U.S. exports, particularly food exports — and the outcome of that clash could affect U.S. containerized imports as well.

Reports first surfaced in late October that carriers were rushing containers back empty from California to Asia to serve lucrative headhaul trades instead of loading U.S. export cargoes.

Federal Maritime Commission (FMC) Chairman Michael Khouri warned in December: “We are looking into all potential responsive actions, including a review of whether ocean carriers’ actions are in full compliance with the Shipping Act.”

California government officials informed the FMC last Thursday that “the operations of our agricultural sector, which relies heavily on export markets, are being heavily affected.” They blamed carrier practices “related to detention and demurrage charges, export container availability and container-return practices.”

The World Shipping Council (WSC) and the Pacific Merchant Shipping Association (PMSA) countered that the proposed cure is worse than the disease.

In response to California’s letter to the FMC, the shipping groups responded on Tuesday that “the adoption of these proposals would make congestion and intermodal equipment availability worse, not better.”

“Imports into the U.S. are at an all-time high but exports are dropping like a rock,” said Flexport Vice President Anders Schulze during a webinar last week. “The ratio of U.S. imports to exports is increasing to a level we’ve never seen before — it’s now more than 3 to 1.”

Consultant John McCown recently analyzed import and export flows through the top 10 U.S. ports. He found that the year-on-year change in the three-month trailing average as of December was up 22% for imports and down 4% for exports. The divergence is “striking,” said McCown.

Bloomberg reported that the global food trade is being “upended by the container crisis.”

It said that the competition for scarce containers is not only impairing food exports from America, but also from Thailand, Canada, India and Vietnam.

American Shipper asked Agriculture Transportation Coalition (AgTC) Executive Director Peter Friedmann about the current situation for exporters during an interview on Wednesday. “It’s terrible,” he responded. “Terrible as in losing sales, losing customers and losing profits after you pay significant penalties when you don’t deliver on time.

“A number of members [of Congress] are set to take action,” asserted Friedmann, who said that the crisis has led to “upset [FMC] commissioners, upset exporters, upset governors and upset congressmen.”

“Everyone experiencing these unprecedented conditions has been impacted by the business challenges, costs and delays resulting from the pandemic and its demand surge,” they said. “It is simply not the case that agricultural exporters in California are being singled out for disparate treatment in the intermodal supply chain.”

Regarding California officials’ proposal to suspend or reduce detention and demurrage and other charges, the groups maintained that “this would create a disincentive for cargo interests to move import cargo off of marine terminals or to promptly … unload cargo from containers and return those containers for further use.”

They argued that this would reduce container availability for both importers and exporters — and create even more port congestion.

Friedmann lambasted the WSC and PMSA rebuttal as “old and tired.”

“It’s a little easy for ocean carriers and terminals to blame everything on COVID,” he said, adding, “This notion that carriers need to charge fees as an incentive is an old song you’ve heard for decades.”

To gauge changes in container flows, American Shipper analyzed the combined monthly throughput at the ports of Los Angeles and Long Beach during the past two years.

The data shows a surge in outbound empty containers as well as loaded import boxes. It does not show a precipitous decline in export volumes, which appear relatively steady over time despite the recent outcry over lack of container availability.

In July-December, loaded inbound containers to Los Angeles/Long Beach jumped, as did empties going westbound, while loaded outbound boxes were down only marginally. Over the past two years, combined exports volumes through the ports have been relatively flat.

This data shows that the rise in empty outbound containers is being fueled by higher imports, as the surging volume of arriving boxes is turned around in Los Angeles/Long Beach and sent back to China. While export volumes are down, they’re not “dropping like a rock.” Click for more FreightWaves/American Shipper articles by Greg Miller