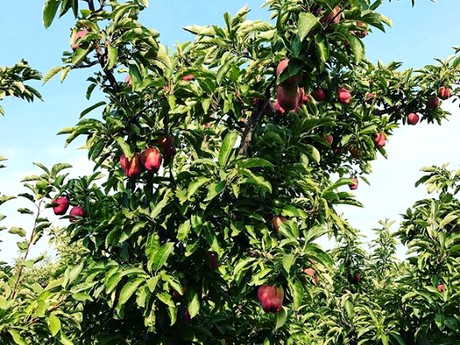 A late bloom has delayed the Washington apple season. Although harvest is well underway, most varieties are reportedly running behind schedule in the order of 7 – 10 days. A cool spring is to blame for the delayed bloom and subsequent harvest. Currently, growers have just about wrapped up harvest of early season Galas and are about to start on some of the mid-season varieties.

“We began picking a few early season apples like Gala and Honey Crisp in mid August,” shared John Long of L&M Companies. “But it’s been extremely slow going as everything is running a little later this year. Our Gala harvest spanned from August 25 to September 10, which means we have picked the better share of this variety. We are barely getting started on some of the other varieties now, including Red Delicious, Granny Smith and hopefully Fuji any day now.”

Despite the delay on the various apple varieties, Long noted that in the context of the entire season, not much of a difference is being felt. “When compared with the long term average, the season is not too late,” he said.

Crop bigger, but fruit size smaller
Growers say it’s too early in the season to be able to determine exactly how much yield can be expected for the 2019 crop. However, the general prediction is that the crop will be bigger than last year’s. On the sizing front, fruit is expected to be smaller than average. These have already been observed in the Gala crop.

“We are not really far enough along to put a number on this year’s crop,” Long said. “The Gala crop has been close to estimates, which is pointing to a bigger crop than last year. Some of the fruit will definitely be on the smaller side. Last season, sizes were peaking between 72s and 88s, while this year we are predicting a peak from 80s to 113s/125s. This can vary depending on the orchard but we can say with some certainty that sizing will be generally smaller. Quality is expected to be very very good, and we are already seeing that in the early varieties.”

Crimson Delight and Cosmic Crisp
One of the newer varieties that has come out in the last five to ten years is Crimson Delight. Developed by Washington State University and trademarked by Apple King, Crimson Delight is a cross between Splendour and Gala. By accounts, growers are pleased with how the apple has taken to the soil and is fairly resistant to pests and diseases. Long describes it as a “hard, dense apple like a Pink Lady or Braeburn in texture, and it also keeps well”. He also noted that sliced apple processors are increasingly interested in it.

“It cleans well so many of the slicers are picking it up,” Long observed. “It eats very well but it is always a challenge to get retail to pick up new varieties. The volume is not very large but it is gaining momentum and we began organic production last year. It typically harvests from October 15 through November and ships until July.”

A more recent newcomer which will be making its first appearance in stores this year is the Cosmic Crisp. Long mentioned that there is great interest in this variety, and many trees have been planted. “Cosmic Crisp production this year will only be a few bins but in five years, there is expected to be more than 10 million boxes available. A lot of Cosmic Crisp has been planted and there is great amount of enthusiasm for this new variety. It will be interesting to see how it goes.”

Organic and pouch bags continue their momentum
Each year is seeing an increase in the usage of pouch bags, especially at the retail level. According to Long, it continues to be a trend as pouch bags are a good way to sell three or four apples instead of one. “We continue to sell more pouch bags, with the retail community particularly heavy into them,” he said. “Pouch bags display well and we will continue pushing them.”

Long added that organic is another category that continues to see growth. “Organic is really growing. Every retailer is carrying at least one variety of organic apple now. Additionally, more growers are moving in that direction.”