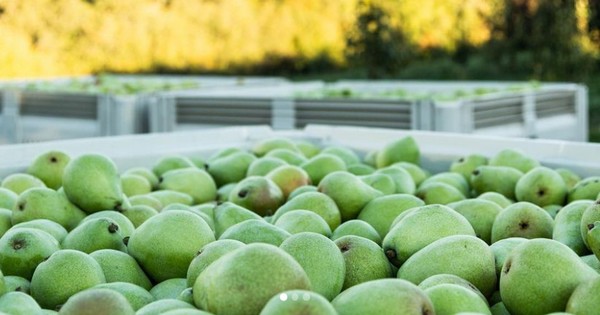 Like apples in Washington, pear harvest is also delayed. “We’re just getting rolling. Typically we would have been going for a couple of weeks. But with the springtime cold weather, everything is delayed,” says Dan Davis with Starr Ranch Growers. “So supplies of pears are a little tight to start.”

However, the transition from California pear production to Washington looks to be a smooth one. “They’ve pushed through their product relatively quickly and we’ll get into ours right about the time they’re ready to hand the market to us,” says Davis.

While pear quality looks good, sizing is still developing. “A few weeks ago, it looked like the crop was going to be a bit more size-challenged from a fruit size perspective,” says Davis. “But now that we’re actually at harvest, we don’t think we’ll be as size challenged as we thought. Maybe half a size off of what we were last year.”

Overall the size of the crop is slightly down this year. However, it’s one with ample availability and promotional opportunities.

To meet this crop is, for now, flat domestic demand and that’s something Starr Ranch looks to change. To help move product, it’s turning to more packaging this year such as fruit in bags, fixed-weight retail packaging and more. “We’re also looking for more display opportunities and a move closer to the front of the store to increase awareness of pears. They’ve been at the back of the produce department for the last several years so we’re trying to invigorate the category and get them merchandised in a more appropriate spot,” says Davis.

At the same time, processing demand for Bartlett pears is high–a trend seen in California as well. Davis says this will help alleviate supplies of smaller or lower grade pears.

All of this leaves pricing slightly stronger this year, though not enough to offset the increased input costs growers and shippers have been absorbing such as freight, packaging, supplies and more. “I think pricing will stay where it is,” says Davis. “Once the pipeline is full, it’ll hang a little above normal. With all the inflationary effects hitting us factored in, it has to stay a little higher.”