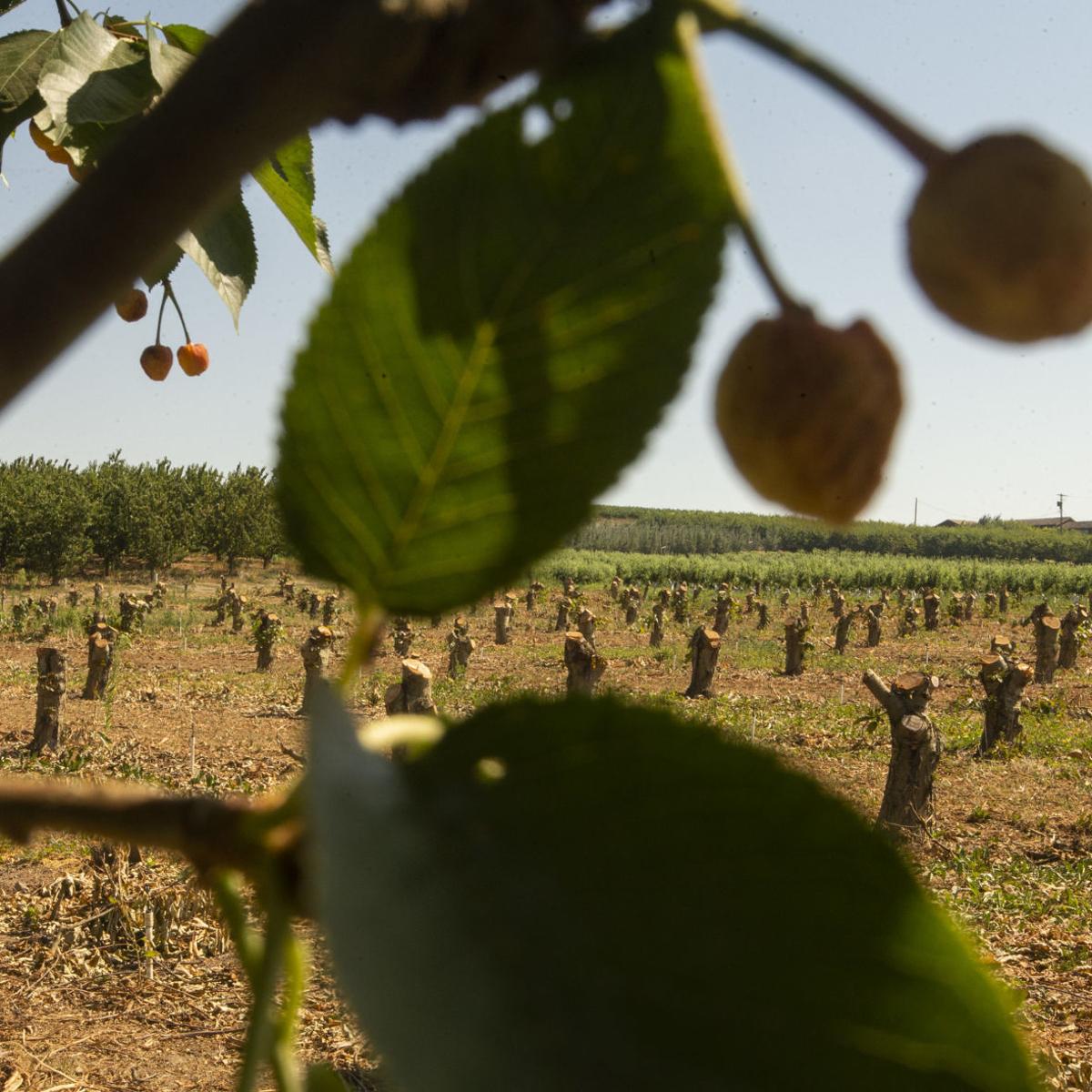 Ric Valicoff estimates that a year ago, 20 percent of the trees at his 10-acre Rainier cherry orchard near Wapato were infected with little cherry disease.

The cherries on those trees could not be picked and sold. They were small and discolored — a faded yellow-pink.

This year, 90 percent of his trees were infected. Valicoff tried to pick some of the cherries, but the orchard was far too infected.

Within just a few years, the 20-year-old orchard had become unusable. Valicoff is in the process cutting down all his trees, spraying those that haven’t yet been cut in order to prevent infection from spreading to neighboring orchards.

Soon, the orchard will be open farmland.

“It’s a wipeout,” Valicoff said as he walked through the orchard Friday morning.

Cherry orchards throughout the Yakima Valley and Washington are experiencing a big outbreak of little cherry disease. Industry officials and researchers say growers need to respond before it destroys the Northwest cherry industry.

Thousands of infected trees are being removed, including Valicoff’s. After the harvest, growers will begin spraying to get rid of the mealybugs that spread the disease from tree to tree, orchard to orchard.

“If it keeps spreading, we could see real losses in overall production,” said Craig Harris, a manager for Harris Farms, which grows cherries in Tieton and Moxee. He’s also on the board of the Cherry Institute, an annual event for Northwest cherry growers.

The board recently sent emails encouraging growers to watch out for the disease and to respond quickly to signs of infection.


Little cherry disease infects trees through three pathogens. In the Yakima Valley, the most common pathogen of the disease is Western X phytoplasma, bacteria without a cell wall.

Mealybugs carry the disease, which can also be present in new trees made with the budwood of infected branches and transmitted through infected roots intertwined with those of a neighboring tree.

Researchers at Washington State University said it’s hard to identify infection early because the most visible symptoms only show up during harvest, usually in the form of small, immature and discolored cherries.

“It’s slow to build, but once it does, it starts to accelerate,” said Scott Harper, an assistant professor based at the Washington State University Irrigated Agriculture Research and Extension Center in Prosser.

The most prolific devastation from cherry disease occurred in British Columbia. The disease first popped up there in the 1930s and slowly infected trees over several decades until it nearly wiped out the region’s cherry industry in the 1970s.

As with the outbreak in British Columbia, the one hitting this state was gradual.

Dan Griffith believes a virus infected his father’s Bing cherry orchard about 30 years ago, but it wasn’t apparent until about 10 years later. Eventually, the entire orchard was infected.

In hindsight, he realized the orchard was infected with little cherry disease. Griffith now works as the tree fruit crop consultant for G.S. Long and helps growers respond quickly to infection.

“It’s a very high-risk and devastating disease,” he said.

“It would have been nice to be taking the active steps we’re taking now two or three years ago,” Harper said. “We’re in crisis mode now.”

To avoid a similar scenario to the one in British Columbia, “aggressive” management is needed, he said. That will create short-term pain for growers.


Harris, the Harris Farms manager, said thousands of infected trees had to be taken out at his farm.

Along with the Rainier orchard he lost in Parker Heights, Valicoff said he plans to take out another orchard of 9 acres nearby due to infection.

That amount only accounts for the loss of trees. There’s an additional financial loss not having the orchard land in production. Moreover, growers cannot plant new trees because there’s the risk of infection from remnants of the disease on the ground, Harper said.

A significant loss in production is expected in the years to come, but the exact amount is hard to determine because there are still new trees that will be ready for harvest, said B.J. Thurlby, president and CEO of Northwest Cherry Growers, which represents growers in Washington, Oregon, Idaho, Montana and Utah.

“There is no formal tracking mechanism,” he said.

There is also an additional cost in protecting clean trees from being infected. Previously, cherry growers only had to spray an orchard once post-harvest to get rid of mites, said Griffith of G.S. Long. Now cherry growers will need to spray once every 10 days to two weeks for several months to ensure any insects that carry the pathogen — Western X — do not infect them.

It typically costs about $25 an acre to spray the orchard. The sprays used could cost anywhere from $10 to $40 an acre. Also, there might be a need to spray with a miticide, which can cost $50 an acre, Griffith said.

“It adds up quickly,” Griffith said.


Researchers at WSU hope to stop the current outbreak and prevent others in the future.

There are many questions to answer: how the pathogen materializes into little cherry disease; what measures can be used to slow or stop the spread of the disease; and the impact of the disease on other stone fruits, such as peaches and nectarines.

Long Term, researchers want to identify any sources of resistance and whether those sources could be bred into new trees.

A task force including industry officials and researchers from WSU and Oregon State University is trying to provide information on Little Cherry Disease for cherry growers in Hood River and The Dalles. The group will focus on research that can help address the virus short-term.

But long-term research is also needed.

“This is a cyclical disease,” Harper said. “(An outbreak) happened in the ’40s and ’50s and it’s back again. How do we break that cycle? That’s what we’re asking ourselves.”

In the meantime, the cherry industry’s focus is to get all growers to fight the disease, either by removing infected trees or spraying orchards. Growers are also encouraged to educate others about Little Cherry Disease.

If one grower opts out, the disease will continue to spread, Harper said.

It’s a message that growers like Valicoff and Harris are trying to impress on their neighbors and others in the industry.